This post will compare two of the popular algorithms used to attack this shortest-path problem in graph theory, Floyd’s algorithm and Dijkstra’s algorithm.  I will briefly describe each algorithm, compare the two, and then provide guidelines for choosing between them.  In addition, I will describe the results of test cases I ran on both algorithms.

The shortest path problem is the problem of finding a path between two vertices of a graph with a minimum total edge weight.  The application of shortest path algorithms is useful in solving many real-world problems.  They can be applied to network and telecommunications problems in order to find paths with the lowest delay.  Additionally, mapping software utilized these types of algorithms to find the optimum route between two cities.

Both the Floyd’s algorithm and Dijkstra’s algorithm are examples of dynamic programming.  Dynamic programming is a technique for solving problems by breaking them into smaller sub-problems.  Each sub-problem is solved only once and the results are stored for later use.  Dynamic programming algorithms are more resource intensive than their non-dynamic counterparts, which give them a higher space complexity.  However, this higher space complexity should be offset with a lower time complexity.  This time complexity reduction will often be linear, and while the theoretical gain is minimal, the actual performance increase may be significant.

Dijkstra’s Algorithm
Edsger Dijkstra discovered Dijkstra’s algorithm in 1959.  This algorithm solves the single-source shortest-path problem by finding the shortest path between a given source vertex and all other vertices. This algorithm works by first finding the path with the lowest total weight between two vertices, j and k.  It then uses the fact that a node r, in the path from j to k implies a minimal path from j to r. In the end, we will have the shortest path from a given vertex to all other vertices in the graph.  Dijkstra’s algorithm belongs to a class of algorithms known as greedy algorithms.  A greedy algorithm makes the decision that seems the most promising at a given time and then never reconsiders that decision.

In order to test the efficiency of these algorithms I ran several test cases.  I implemented Dijkstra’s algorithm using a priority queue and I ran each test case 1,000 times.  All of the results are aggregations of the 1,000 runs, which gives me a larger, more manageable number.  I ran six test cases, for each algorithm, varying the number of vertices in the graph.  I used an automated method for creating edge so the sparseness of each graph is always the same.

The chart in figure 2 shows the total number of seconds for the same values of n, but with each iteration of Dijkstra’s algorithm being repeated n times.  The result is that Dijkstra’s algorithm has also found the shortest path between all vertices but we the time requires increases by 6 when the value of n doubles. 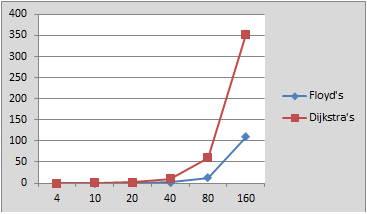 In order to find the point at which Floyd’s algorithm is more efficient that Dijkstra’s algorithm I ran an addition test, only using the graphs with 80 nodes.  The chart in figure 3 shows the results for finding the paths for a varying number of vertices.  It shows that finding the shortest path for 21 vertices takes about 13 seconds, which is higher than the 12.65 seconds Floyd’s algorithm need to find all paths. 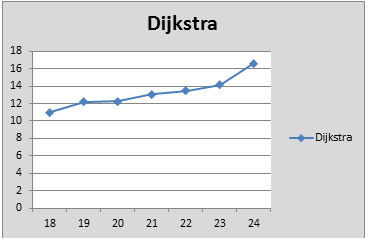 Table 1 below gives the raw data used for the charts in figure 1 and 2.  Table 2, shows the raw data for Dijkstra’s algorithm when called for a different number of vertices.